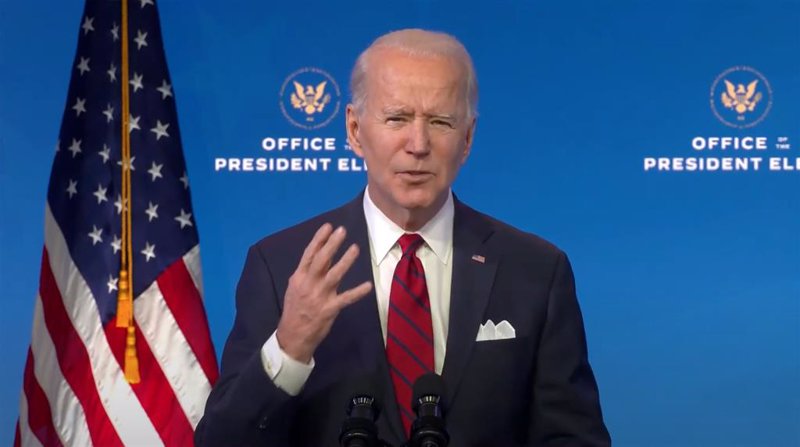 US President Joe Biden announced on Thursday afternoon a new goal of injecting 200 million coronavirus vaccines in his first 100 days in office. He has stated it in the first press conference he has given as president.

"Today I am setting the second objective, and that is, for my hundredth day in office to have applied 200 million doses in the arms of the people ", has affirmed the president.

Biden has recognized that it is an "ambitious" goal but has shown confidence that it is feasible, since "no other country even comes close to what we are doing", has affirmed.

He also recalled that at the beginning of December a goal had been set to reach 100 million of vaccines in the first hundred days in the mandate. "We got it last week, on day 58," he indicated.

During the term of former President Donald Trump, the vaccination rate was slower than expected, but since the rise to power of Biden, the rate of vaccination in the United States has increased rapidly, and in the last week an average of about 2.5 million doses a day has been injected.

If this rate of vaccination is maintained, the goal that the president has proposed to inoculate 200 million doses would be reached in about five weeks, around April 23, a week before Biden turns 100 in the White House.

The federal government has an agreement with Johnson & Johnson for the delivery of 200 million doses. The first half of that order is expected by the end of June. The German multinational pharmaceutical manufacturer Merck is helping to manufacture the J&J dose, which is a single dose vaccine.

The administration also has agreements with drug manufacturers Pfizer and Moderna for a total of 600 million doses.

These doses are enough to vaccinate 300 million Americans, since both the Pfizer and Moderna vaccines require two injections three to four weeks apart.

Secretary of Defense Lloyd Austin approved in February the deployment of more than 1,000 active duty soldiers to help distribute Covid-19 vaccines across the country, in an effort to speed up the pace of vaccinations.

Top altcoins to buy during this Bitcoin correction