According to data from TradingView, on the Binance cryptocurrency exchange, around 10:33 UTC on Saturday (March 13), the price of Bitcoin reached the long-awaited new all-time high of $ 60,000. 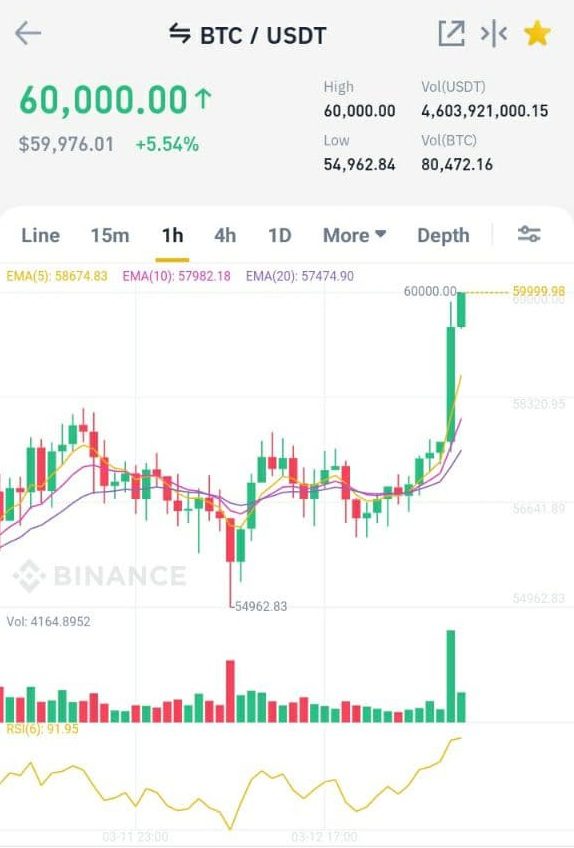 Rafael Schultze-Kraft, chief technology officer for on-chain market intelligence startup Glassnode, said that more than $ 100 million in short positions had been liquidated as a result of a short squeeze:

Here is the Binance academy describing the anatomy of a short squeeze:

“A short squeeze occurs when the price of an asset rises sharply due to many short sellers being forced out of their positions.

Short sellers are betting that the price of an asset will go down. If, instead, the price rises, the short positions begin to accumulate an unrealized loss. As the price rises, short sellers may be forced to close their positions. This can happen through stop-loss triggers, settlements (for futures and margin contracts). It can also happen simply because traders manually close their positions to avoid even bigger losses.

Ki Young Ju, CEO of CryptoQuant, a South Korean blockchain analytics company, believes that today's rise in the price of Bitcoin "came from the purchasing power of stablecoins." The large negative gap between the price of Bitcoin on Coinbase and on Binance suggests that there was a lot of buying pressure from Binance.

Since financing rates weren't that high at the time of the increase, one analyst believes it was driven by spot buyers.

Many people have deleveraged * before * the price uptick.

It is safe to say that the current #Bitcoin surge is driven by spot buyers.

Cryptanalyst Lark Davis suggested that it was not too late to buy Bitcoin yet, as you could easily 10 times from here in the next few years:

Chaos with AstraZeneca threatens Europe: "Other vaccines must be secured quickly"

Justice agrees with Ayuso and maintains early elections in Madrid

NYDIG Signs Partnerships to Bring Bitcoin to the Insurance Industry, a $ 6 Trillion…

SEC's request for disclosure of BG's and Larsen's personal financial…

It's altcoin season! 15 cryptocurrencies to watch closely in April

Will Dogecoin be listed on Coinbase soon?