Bitcoin has set a new record! The highest valued cryptocurrency broke $ 34,000 and rose to $ 35,800 before backtracking to this edition's closing price of $ 34,741. Rest assured, the bulls are still largely in control, according to trading charts. The one-day market move reflects a bullish force that has deftly turned down the bears. Bitcoin is surely ready to retest its new all-time high, but the bigger question is; How soon? Decisive technical factors include Bitcoin's ability to sustain momentum above $ 34,000.

A move up is as possible as a slide down. If this uptrend does not hold, Bitcoin may not turn down to the bottom, but the bull may return to the $ 33,000 and $ 32,500 range. If the latter becomes the case, this will lead to a price difference of $ 8,000 from the analysts' $ 40,000 price prediction, which is anticipated to be reached before the close of this month. Bitcoin podcaster Max Keizer is even more bullish and, on Twitter, He says "$ 42,000 at stake". Year-end price predictions are coming as well and JPMorgan strategists have set the bar even higher, with the claim that Bitcoin could hit $ 146,000. New all-time highs are expected to follow suit in the future, but this rise is attributed to multiple sources. 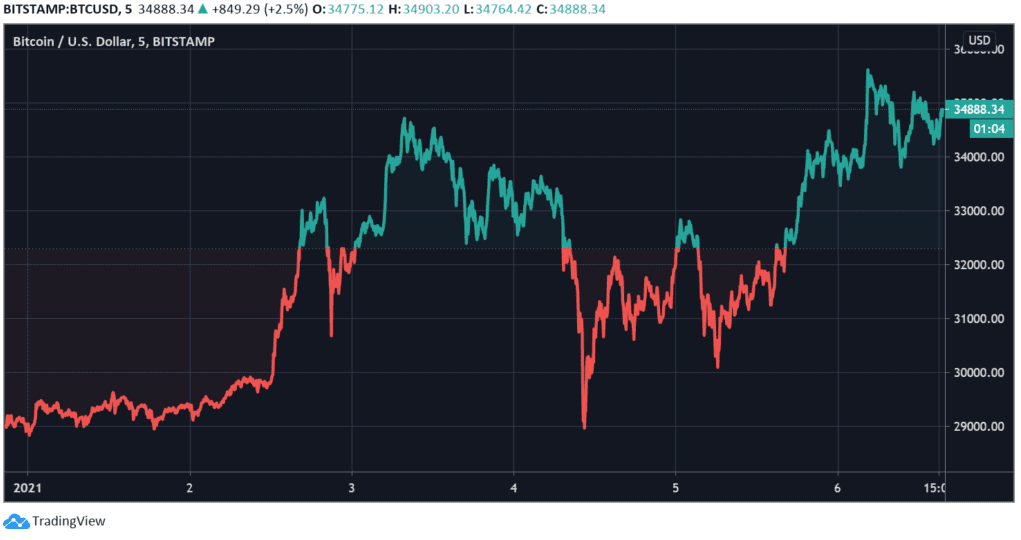 Crypto-commentators have credited the bull run to the Georgia Senate elections in the United States. News that Democrats will take him home is reportedly fueling the bullish rally. Apparently, the Republicans who secure the seat will not result in as much monetary and fiscal stimulus as the Democrats, hence the enthusiasm. At the other extreme, the stock is in the middle ground as the entry of the Democratic Senates is believed to lead to overregulation of banks and higher taxes, which in turn will trigger a price correction. 10% for stocks that fell sharply with the arrival of the new year.

Meanwhile, analyst Joseph Young hints that Asian investors are behind the uptrend. Young claims that Asian whales currently dominate the market, adding that the Asian season has only just begun.

Oh, and it is Asia session.

Prior to this, Young noticed a $ 60 million worth of Bitcoin sale sent to Bithumb, the major South Korean-based exchange. It was hinted that the whales could take a massive dump that could bring down the price of Bitcoin, but it appears to be the opposite, at least for now.

It's 1 am in South Korea. Don’t tell me Asia is evolving and will now dump night and day as well.

If BTC drops, then this probably it. If it goes up, then Asia whale is behaving. pic.twitter.com/rO5g9OqcLA

the first scam discovered from 2021

Bitcoin catches the attention of giants