Bitcoin (BTC) adoption is constantly on the rise

With concerns about the future of fiat currencies and endless money creation, a change is taking place and Bitcoin is showing strong signs of adoption.

Despite the “Crypto Winter” and constant negative bitcoin news from mainstream media, adoption has only increased. According Lucas Nuzzi, Network Data Product Manager of Coin Metrics, "A new cycle of adoption is in the making."

In a recent report from Coin Metrics, a duplication has increased by 27% with bitcoin addresses above $ 10 since the big drop in mid-March. Although this is not an accurate indicator of new individuals in the bitcoin space, the metric can give a general idea of ​​further progression: 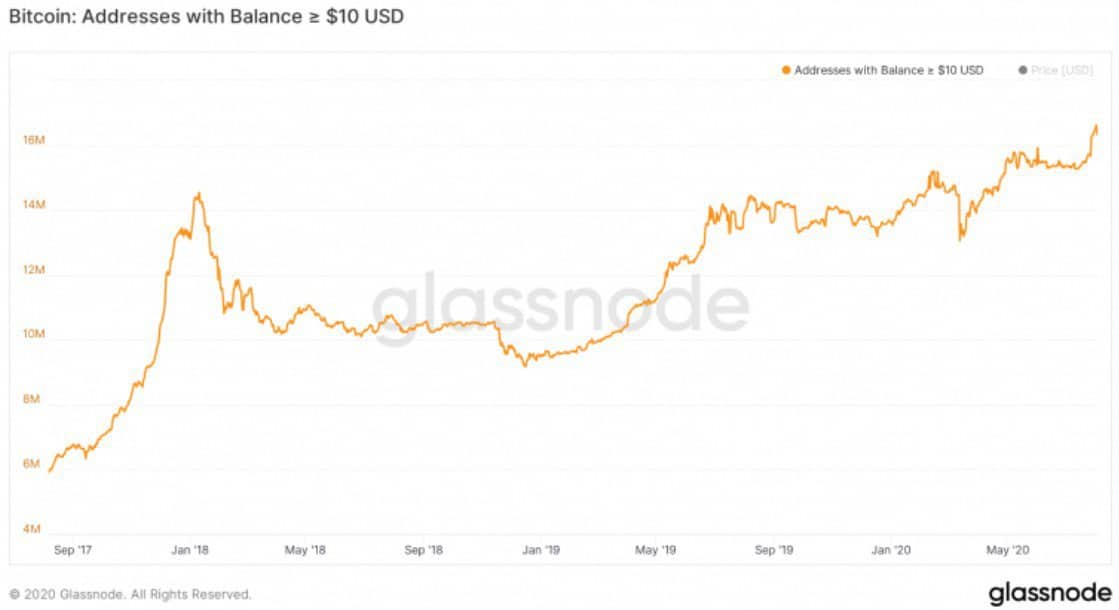 Additionally, an online survey conducted by The Harris Poll on behalf of Blockchain Capital, April 23-25, 2019 among 2,029 American adults, found that the percentage of people who "strongly" or "somewhat" agree on that “most people will use Bitcoin in the next 10 years” increased 5 percentage points, from 28% in October 2017 to 33% in April 2019.

You can also see from the study that the amount of people who will probably buy bitcoins in the next 5 years it has also increased by 8% from 2017 to 2019:

The most notable were those between 18 and 34 years old and between 45 and 54 years old. This is a clear trend and the network effect seems to be spreading continuously.

What about the institutions?

Not only is bitcoin adoption and interest growing with normal retail investors, but institutional engagement is also gaining ground.

In this survey, they found that bitcoin is still the most desired cryptocurrency in a fairly large quantity, indicating:

“Bitcoin is still the digital asset of choice with more than a quarter of respondents owning bitcoin; 11% have exposure to Ethereum ”.

Fidelity found that 36% of respondents said they currently invest in digital assets (27% in the US and 45% in Europe), and 6 in 10 believe that digital assets have a place in their investment portfolio. . They also claim that US investors allocating to digital assets increased to 27% from 22% in 2019.

With concerns about inflation, massive levels of government and corporate debt, and an economic depression, there has been a new wave of notable investors buying bitcoins. Let's see what happened in the last few months:

“We are witnessing the Great Monetary Inflation, an unprecedented expansion of all forms of money that is unlike anything the developed world has seen.

August 2020: One of the largest business intelligence companies on the planet, MicroStrategy, bought $ 250 million in bitcoin for your treasury reserve assets. A month later, the company bought $ 175 million more, for a total of $ 425 million.

“This investment reflects our belief that bitcoin, like the cryptocurrency plus widely adopted in the world , is a reliable store of value and an attractive investment asset with more potential for long-term appreciation than having cash ”.

September 2020: Jack Dorsey's company Square recently bought 50 million dollars in bitcoins, Which is equivalent to approximately 1% of the total assets of the company. Its CFO stated:

"We believe that bitcoin has the potential to be a more ubiquitous currency in the future. As it grows in adoption, we intend to learn and participate in a disciplined way.

According to Messari Research, the total amount of assets under management (AUM) is estimated at $ 104 trillion. This includes office endowments, family, sovereign wealth, pension, and mutual funds.

If the investor influx shown above continues with just a 1% institutional allocation, this would create a $ 1 trillion market capitalization for bitcoin.

There is a very clear trend with the big names starting to invest in bitcoin, and it's safe to say that this will only continue. More investors are beginning to see the reality of the current economic situation: You cannot create unlimited amounts of money and expect it to hold value.

Bitcoin fixes this and there is more exciting news to come.

Citi falls after its results: it earns less but reduces the credit costs of Covid