Tether has surpassed Bitcoin and PayPal in transferred volume

The average daily volume transferred in Tether (USDT) outperformed not only Bitcoin, but also PayPal.

This is revealed by CoinMetrics, according to which, on August 20, the 7-day average value transferred daily exceeded $ 3.55 billion, compared to $ 2.94 billion for Bitcoin. 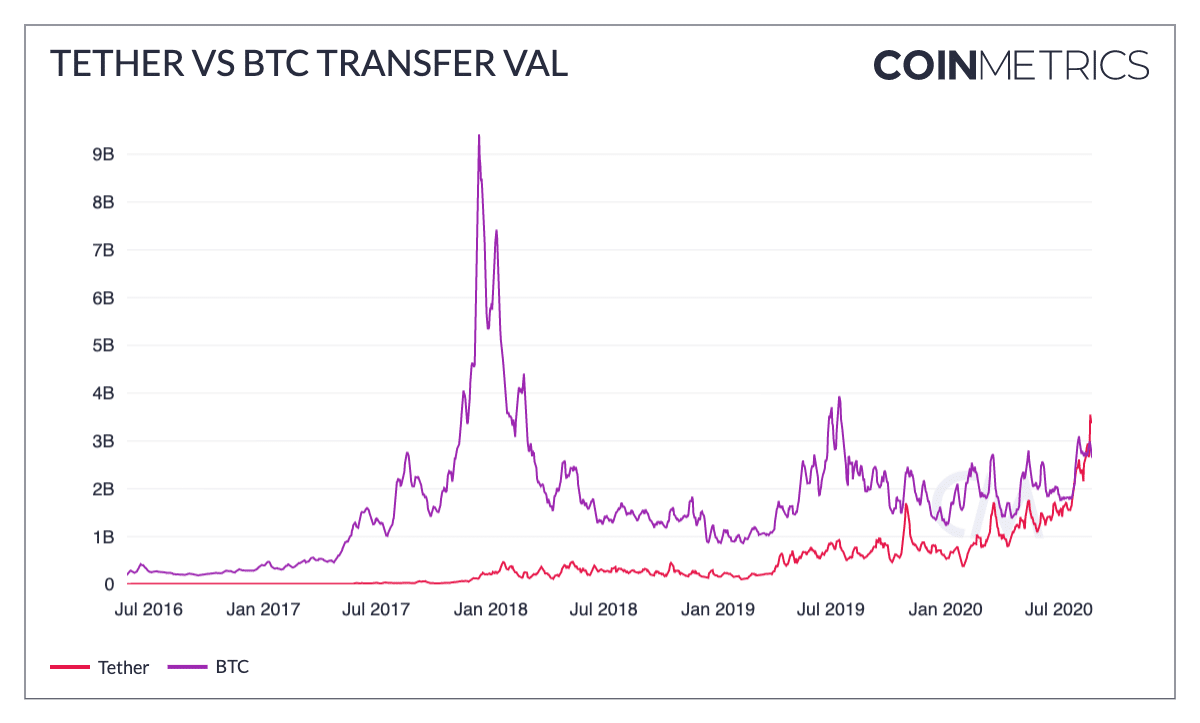 Thus, USDT is not only traded more than BTC, but also generates more transactions and move more volume.

According to CoinMetrics, stablecoins are also increasingly being used in popular DeFi apps like Uniswap and Curve, which likely played a role in this recent surge in Tether's trading volume.

As can be seen from the chart, until March 2020, USDT's average daily trading volume had always been significantly lower than that of BTC except on rare occasions, but as of July, Tether first reached and then exceeded Bitcoin

But this figure is impressive, especially compared to PayPal.

In fact, PayPal's official Q2 2020 report states that Total Payment Volume (POS) for the quarter was $ 222 billion, or a daily average of $ 2.94 billion, as revealed by the economist John Paul Koning On twitter.

Therefore, the daily volume reached on August 20 by USDT is also higher than the average recorded in PayPal from April to June.

This comparison is even more sensational in light of the fact that PayPal is trading fiat money for everyday use, while USDT is a crypto token that is still used by a small niche of people.

However, it must also be said that the majority of USDT volumes are generated by exchanges, while the same cannot be said for PayPal, which is used much more for online purchases on e-commerce websites, for example.

So these are two different uses of two similar but different forms of money, although with the same value.

Furthermore, USDT has the double advantage that it can also be used anonymously and has no restrictions imposed, while PayPal is accepted almost everywhere and allows a lower level of risk.

However, given that as of July 2020, the average daily USDT volume had never exceeded $ 2 billion, and the daily threshold of $ 1 billion was only exceeded in March of this year, along with a single peak late As of 2019, it is reasonable to expect further growth in these volumes, perhaps even well beyond PayPal's current levels.

Starbucks tracks coffee on blockchain thanks to Microsoft

FinClusive Announces Launch of USDC Payments on the Stellar Blockchain

Bitfinex has launched a new tool to accept crypto payments

Dogecoin is now more popular than Bitcoin on Twitter