Bitcoin retail traders are on the rise, as institutions prepare short positions

He halving Bitcoin has passed and the asset is now brushing against the long-term resistance of a positive trend in a three-year triangle. Cryptocurrency market sentiment is euphorically on the rise.

The downside weeks trying to spur a sell-off have failed, as eager buyers buy every drop and absorb every sell order. It has resulted in more than a month of sideways trend, a disappearance of Bitcoin's notorious volatility and declining trade volume.

Most traders agree that a massive move comes in one direction or the other. This is supported by an increase in a metric called open interest that hit all-time highs on the CME Bitcoin Futures.

One side must be wrong, while the other will end in profit. But which direction will the price of Bitcoin take next and what do the current positions of these operators in the CME tell us? Research from award-winning Bitcoin-based trading platform PrimeXBT has broken down the data to shed light on what to potentially expect in the coming days.

The price of Bitcoin has been consolidated between 8,000 and 10,000 dollars for almost two months of price action, unable to break through the barrier on both sides. Cryptocurrency has been trading at these levels many times in the past, including recently such as February 2020.

The collapse of the Black Thursday caused Bitcoin's value to plummet. After bouncing off nearly $ 3,800, the price of Bitcoin has returned for yet another attempt to break resistance to the downtrend.

Resistance to the downtrend constitutes the upper line of a multi-year symmetric triangle. Traders around the world are waiting for the triangle to break for a new uptrend to start.

A breakout of the triangle could cause an explosive move that will bring Bitcoin back to its all-time high. Another strong rejection would cause Bitcoin to drop back to low levels, so bears may place cheaper Bitcoin before an eventual bull run. 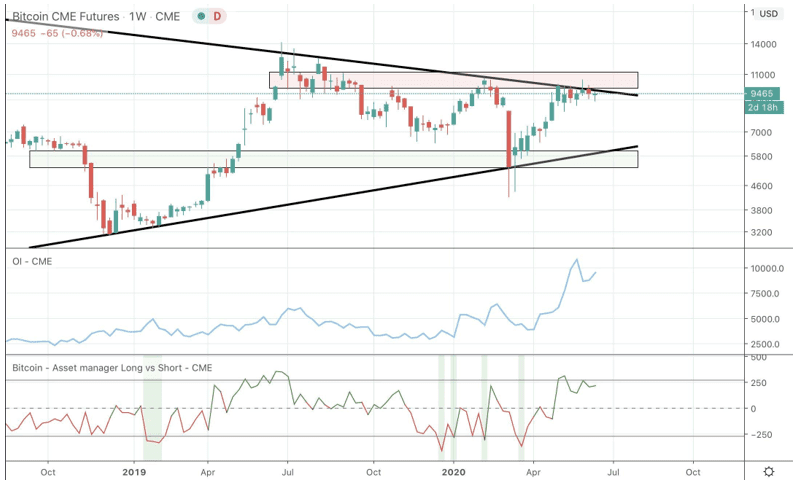 Bitcoin futures traders in the Chicago Market know the potential benefit that a major break or rejection in the price of Bitcoin will bring. This has recently caused the Open Interest hit a record high.

Open interest measures all open positions taken by traders on the platform. CME caters to a very specific type of operator, generally high net worth retailers, hedge funds, and institutions.

Additional data to analyze the relationships between long and short positions for each major change in Bitcoin's price, along with a breakdown of any variations in the types of positions that different types of traders take, can provide insight into what direction the Bitcoin is headed.

According to the numbers, long positions tend to increase every time Bitcoin exceeds or brushes above $ 10,000. But there is always a crash. Once Bitcoin reaches lows, the opposite happens.

How are you wrong most of the traders? Counter trading is a strategy discussed by some of the world's largest investors and traders.

This is because the best traders do not follow the herd. The futures data on the Bitcoin CME also supports this and possibly suggests that Bitcoin prices will soon collapse.

The data also shows that although the general open interest is overwhelmingly long, institutions or "smart money" opt for short positions in Bitcoin while retail accounts for most of the long ones. The discrepancy and the deviation between the non-reportable (retailers) versus the institutions is alarming.

Will the institutions that run their business by making the right business calls be right again, or will this time retailers who make huge Bitcoin price predictions be lucky?

Prepare for Bitcoin's next explosive move with PrimeXBT

Time will tell, but whichever way the price of Bitcoin breaks, after more than 40 days of consolidation, the move will be explosive.

All research is from PrimeXBT, a Bitcoin-based multi-asset platform, offering access to over 50 cryptocurrency instruments, commodities, currencies and stock indices, all under one roof.

The platform features technical analysis tools and built-in indicators that can help traders prepare a strategy before any breakout. Traders can open a long or short position in anticipation of the move or after any breakout occurs.