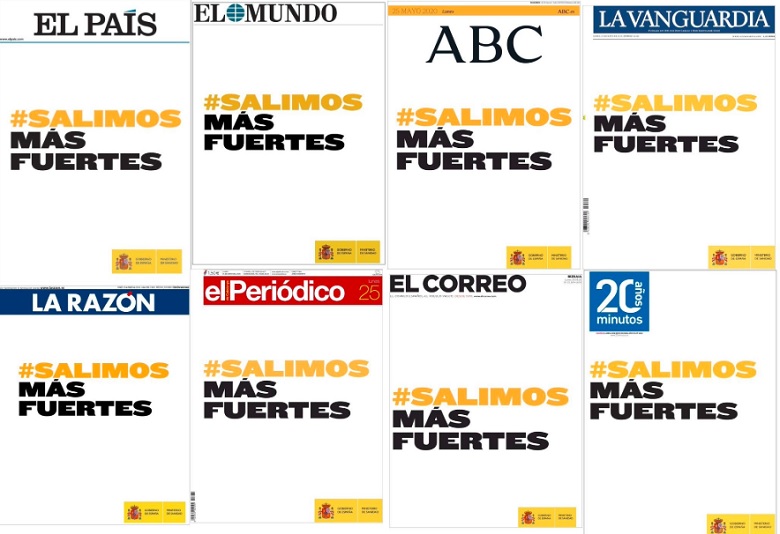 The government has been involved in a new controversy after you have 'bought' the first page of many Spanish newspapers to place your last advertising campaign. Coinciding with the entry into phase 1 of the de-escalation of the territories that had not yet advanced (Madrid, the metropolitan area of ​​Barcelona and Castilla y León), the Executive of Pedro Sánchez has published an institutional campaign with the slogan #SalimosMásFuertes, referring to the coronavirus crisis. And the criticisms were immediate.

On social media, criticism pivots around two issues. On the one hand, there are those who denounce that this is a message that goes against economic reality from Spain, which is suffering a severe blow from the pandemic. In fact, the Government itself has downgraded their estimates and calculates a 9.2% fall in Gross Domestic Product (GDP) and a 19% unemployment this year, in addition to an increase in the deficit to 10.34% of GDP and that the debt will rise to 115% in 2020.

The most difficult has been left behind.

We have come this far thanks to the responsibility and effort of each and every one. That is our strength.

And these are 'kind' forecasts, because there are analysts who estimate that the blow may be even greater. That without forgetting that Spain is going to need to go to the Rescue Fund that the European Union will launch shortly to help the economies hardest hit by Covid-19. According to Goldman Sachs estimates, the country will receive up to 100 billion.

In addition, among the criticisms of the economic profile of this campaign, there are also those who charge against the decision of the Government of Pedro Sánchez to carry out this expense (buy the covers of dozens of newspapers, both national and regional, and do an advertising spot) in the midst of the collapse of public accounts. Some, in fact, Criticize Taxpayers' Money Wasted To Try To 'Bleach' Coalition Image.

The second side of criticism comes from sanitary side. Because many assure that the motto # SalimosMásFuertes (that the Executive defends to encourage citizens in the de-escalation) does not reflect the reality of what happened. In Spain, almost 30,000 people have died from the coronavirus, and many families have lost a loved one.

"This campaign does not correspond to the economic and health reality," he denounced. Pablo Casado, leader of the PP, at a press conference. "Campaigning at the taxpayer's expense and triumphantly is a bad idea and contradictory to the apocalyptic speech that either the state of alarm is maintained or there will be more deaths," he said.

For its part, Vox has also failed the campaign. "Stronger with thousands of Spaniards dead? Stronger with millions of ruined Spaniards?" Wrote the party president, Santiago Abascal, in a comment on Twitter. "And no, we will not come out stronger as long as the front pages of all the newspapers can be in the hands of a social-communist government," he said.

The attitude of the government is also criticized in the networks, which assures that "the most difficult has been left behind", that "we have come this far thanks to the responsibility and effort of everyone" and that "that is our strength, the strength with which we are going to get out "of this crisis, and they compare their way of proceeding with what Italy has done, one of the European countries hardest hit by Covid-19.

The Veneto government has launched a campaign titled 'Happy Hour?' to remember the dangers of a regrowth, in which he makes it clear that although the terraces open and progress is made in de-climbing, this is far from over, and that behaviors that cause a further increase in infections must be avoided.

The video warns of what could happen if the authorities' measures to end the confinement are not followed. Specifically, young people are seen who do not keep their distance, there are oversights with masks and handshakes to illustrate that everything could stop again and that "the coronavirus is fought in hospitals, but especially outside." The networks see this spot as much more appropriate than that of the Sánchez Executive.

US studies sanctions against China over Hong Kong security law