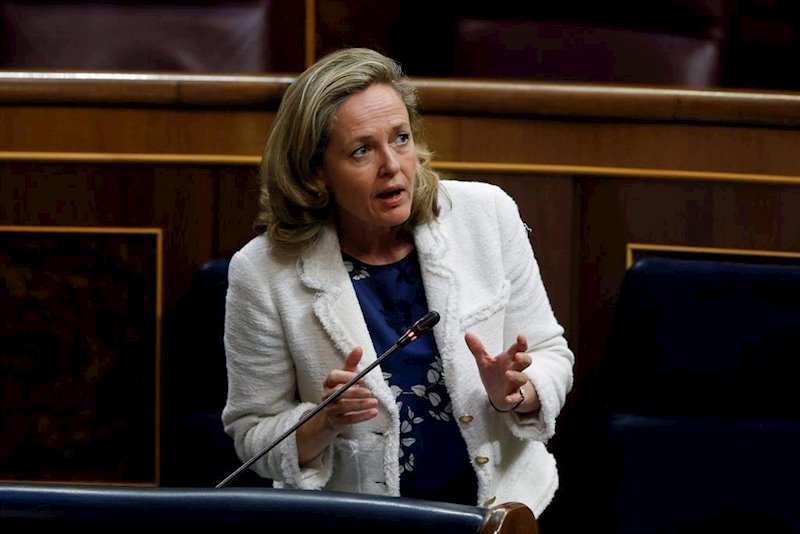 The Vice President for Economic Affairs and Minister for the Economy, Nadia Calviño, is working with the National Securities Market Commission (CNMV) to contain the negative effect of short operations on the Spanish stock market. The news is known after a week in which securities such as Telefónica, Sabadell, Bankia, ACS, Mediaset or Siemens Gamesa have suffered a severe blow to their price due to the lifting the ban on short positions that the regulator had imposed.

This has been advanced by the Government spokesperson and Finance Minister, Maria Jesus Montero, in the press conference that he has offered this Sunday with the Health Minister, Salvador Illa, after the meeting by videoconference that Pedro Sánchez has held with the regional presidents.

"I know that Economy is talking to the CNMV, and is working on this issue so that there is no effect on the stock market and the markets, "Montero said when asked if the government plans to do something after the lifting of the ban on shorts has affected so much to Bankia, in which the State has an important participation.

As explained by the spokeswoman, the department headed by Nadia Calviño is in contact with the regulator headed by Sebastián Albella to find a solution. "If there is anything new, it will be communicated in the next few days," he said.

And it is that the return of the shorts has dealt a severe blow to several of the companies in the IBEX 35 this week. It should be remembered that the CNMV banned short sales on March 17 for a period of one month, and subsequently extended this measure due to the uncertainty caused by the coronavirus crisis.

This Tuesday, more than two months later, raised the veto after analyzing the evolution of the market and the circumstances that initially motivated the adoption of these measures, and after contacting the European securities supervisors who have adopted a similar initiative, but that translated into a new battery of bearish negotiations that caused sharp falls in various titles.

Among the most striking, those who have suffered Bankia and Sabadell, which have set new record lows because of the shorts. The problem, experts say, is that bearish positions have returned with a vengeance because "Betting against Spain and Italy is very tempting". Hence, Economy is working hand in hand with the CNMV to see if any measure can be adopted to prevent further falls such as those that have occurred in recent days.

Madrid will install mask and hydrogel vending machines in the Metro