Mess in Catalonia: the Generalitat is raining criticism for emerging 635 unknown deaths 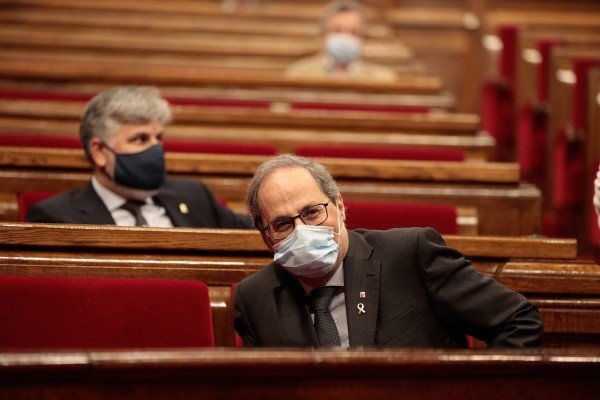 Mess on Catalonia after this Friday the Generalitat 635 dead because of coronavirus unknown until now. The news coincided with the Government's announcement that the Barcelona metropolitan area, the only one that remained in phase 0, will move to phase 1 of de-escalation. The Quim Torra government has defended itself from criticism, claiming that it publishes "all the data" on the evolution of the pandemic, but Fernando Simón He has already warned that these "inconsistencies" will not be tolerated, because it cannot be that "what happens is not known."

The new data provided by the Generalitat of Catalonia this Friday reflected 635 new deceased (which until now the Govern had only computed as unconfirmed cases), of which Health only included three in the daily accounting. This happened after the region did not provide data on Thursday, something that has been attributed to validation problems. However, the director of the Coordination Center for Health Alerts and Emergencies (CCAES), Fernando Simón, has recognized that there is concern in the Ministry of Health by these figures.

The Govern assures that everything is due to an error in the transmission system of cases that until now were counted as suspects for coronaviruses, and has denied that it has detected any outbreaks. "There is no area" that is evolving worse, said the Catalan Ministry of Health this Friday in a statement, which was released late in the afternoon to try to clarify the controversy and respond to Simon's words.

And it is that the doctor, in his usual press conference, warned of the "inconsistency" in the data presented by Catalonia since Thursday and indicated that it was associated "with a specific area." "The problem of yesterday and today has also surprised us. We are trying to understand the problem that has occurred with your data, and both the Catalan Public Health authority and the Ministry of Health are going to have to be very aware of what happens because It is not trivial that we cannot know what is really happening right now in Catalonia"said Simon.

According to the CCAES director, the ministry headed by Salvador Illa is aware that the problem with the data offered by Catalonia is "associated with a specific area" and, therefore, the problem is not general to the entire autonomous community. "But we are concerned that it could happen in other" areas, he said.

However, the Generalitat insists that there is no such problem despite the fact that the official record for Friday has revealed 688 more deaths compared to yesterday, of which Health only recognizes 56. Of those 688 dead of whom nothing was known, 635 have been reported by Catalonia. "We consider that, if the Ministry believes that this area exists, it should have communicated it yesterday. Health, as it cannot be otherwise and for the good of all society, would be the first to indicate the existence of some area of ​​the country where the evolution of the data was worse than expected, "he defended himself.

But the controversy was already on the table, and the opposition has launched en masse to ask for explanations to the Executive of Quim Torra. The PP of Catalonia has demanded the appearance of the Minister of Health of the Generalitat, Alba Vergés, to "clarify" the variations in the data of deaths by Covid-19. According to this party, the daily health communications 206 "deceased" between May 18 and 22 have been "disappeared", which is added to the incorporation this Friday by the Ministry of Health of 635 new deaths due to delays in notification of deaths in Catalonia.

The PP spokesman in the region, Santi Rodríguez, has defended that these differences in the data provided by the Govern "are not malicious interpretations of anyone but their own data." And the Popular Party has not been the only one to ask for explanations. So has the PSC.

Specifically, the Health spokesperson for this training and deputy in the Parliament, Assumpta Escarp, has demanded that the Catalan Secretary of Public Health, Joan Guix, go to the Health commission and "explain at once what is happening to the data from Catalonia, and say above all the actual number of people affected and killed "by coronavirus.

"For too many days we have been seeing inconsistencies and data that do not match in Catalonia on those affected and killed by Covid-19," said Escarp, who has asked not to play with statistics, or especially with people's feelings. "They have talked a lot about transparency, and what we are seeing is that it was the last thing there was," added Escarp after the Ministry has incorporated the aforementioned 635 deaths.

According to the Catalan Ministry of Health, he knows perfectly well the reality of the evolution of the virus in Catalonia: "The Ministry asks us for some of the data that the department publishes daily and interprets, but only the Generalitat knows the epidemiological reality" region of.

Beka Finance gets covered in the bid for Degroof Petercam