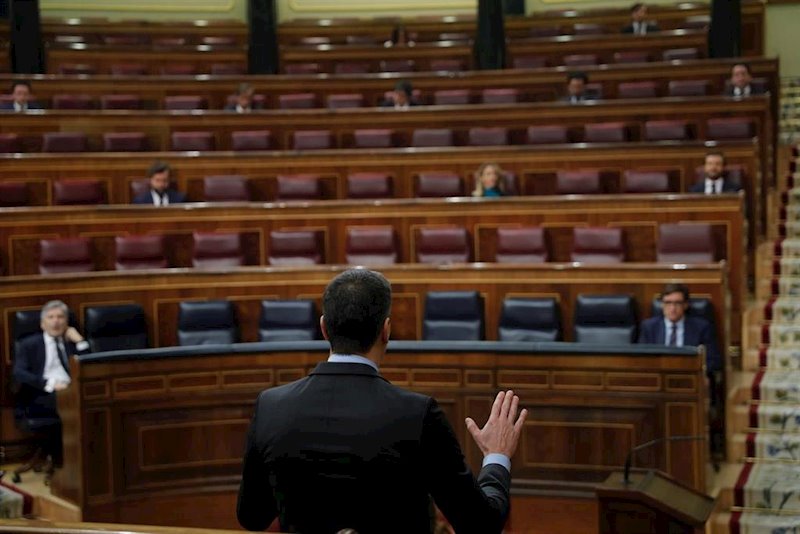 The Government has carried out the extension of the state of alarm for another 15 days, until May 24, thanks to the support of the PNV and Ciudadanos. The PP has finally opted for abstention, which leaves the result at 176 votes in favor, against the votes against Vox, the CUP, Junts per Catalunya.

In addition to the 155 votes of the PSOE and United We Can, the Government also has the PRC, Teruel Exists, More Country and Commitments, with which has reached 160. The 10 deputies of the parliamentary group chaired by Inés Arrimadas and the six of Aitor Esteban assure that the Government of Pedro Sánchez keep your full powers until almost the end of may, to continue piloting the following phases of the de-escalation.

However, it was not free. The refusal of the popular people of Pablo Casado to continue voting alongside the Executive has put pressure on the PSOE-United Podemos coalition to reformulate your forecasts of a state of alarm 'sine die', which the Prime Minister hinted at this Saturday, when he stated that he did not have a 'plan B'. And he's also been forced to negotiate with Basque nationalists on some aspects such as the iron command with which he has handled the crisis. As of May 11, when the extension approved today will come into force, the absolute powers will have to be gradually replaced by a co-governance plan with the autonomous presidents, as the PNV has demanded.

The nationalist formation sees need to "improve" the alarm status designed to adapt it "to the reality of each territorial area". Thus, in line with the position transferred in recent weeks, it proposes that de-escalation be managed "in a shared way" with the autonomous communities. Specifically, EAJ-PNV requests that the different measures established in each of the transition phases be agreed "jointly with each Autonomous Community", thus implementing codecision and co-governance of the crisis, and that these be "applied by whoever holds the Presidency of the Autonomous Community, as ordinary representative of the State in the territory".

This agreement opens the door for the CCAA to gradually assume the execution of the back to the "new normal" which is not estimated until the end of June. For example, Catalonia has already advanced that its proposal is that in Catalonia there are "differences between health regions" when it comes to misunderstanding in the context of the coronavirus pandemic. This was announced by the Minister of Health of the Generalitat, Alba Vergés, who also explained that "it is very hasty to put calendars."

Instead, in the Community of Madrid considers the possibility that all children return to school in June, at least fifteen days, something that cannot happen until the regions fully recover their powers and the autonomy statutes work again.

Likewise, the PNV has obtained from Moncloa the necessary collaboration of the different State organisms so that the communities, making use of their exclusive competence in the matter, can, with the precise sanitary measures that guarantee the safety of the citizens, call and hold elections, as Both Basque and Galician are pending. In short, he wants "the validity of the state of alarm does not pose any obstacle to the development and carrying out of the electoral actions necessary for the development of elections called to Parliaments of Autonomous Communities."

Another of the concessions that the Government has had to make is to start organizing in order to this is the last extension of the alarm conditions. The PNV's EBB president, Andoni Ortuzar, believes that the fourth will be the last, making it clear that his formation does not plan to continue voting in favor. The PP has also said that it is the last time that his party maintains abstention, anticipating a vote against on future occasions, and has demanded that Sánchez negotiate and use other laws to take measures or "do not ask for loyalty and unity again from the opposition".

Commitment to Citizens involves maintaining dialogue for the adaptation of ERTEs and aid to SMEs and the self-employed so that these "and the rest of the social protection measures can be adapted to the needs that occur beyond the Alarm State."