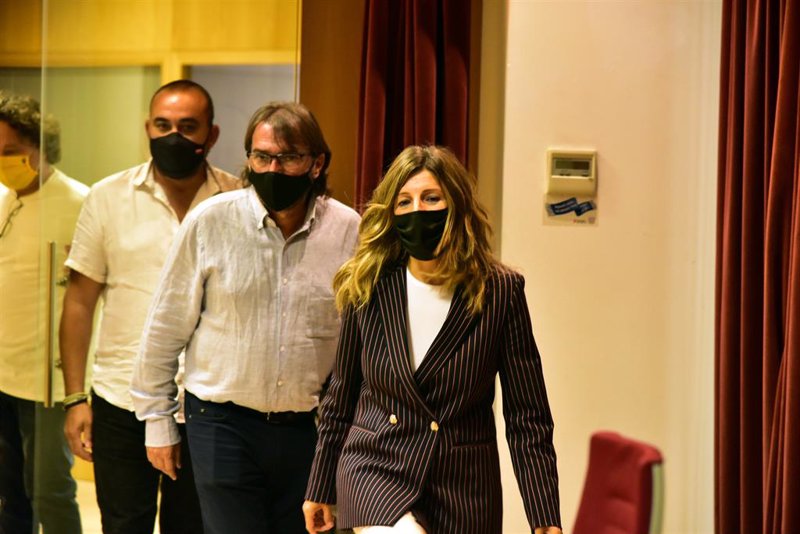 The Minister of Labor, Yolanda Diaz, He has advanced that his department works on the regulation of the presentation of Temporary Employment Regulation Files (ERTE) during the de-escalation and studies that, within this framework, the companies that pay dividends cannot present them.

In an interview published in the newspaper La Vanguardia, Díaz explains that the ministry is studying "measures, new guarantees, so that, due to the enormous benefits they receive from an ERTE, companies that are based in some tax havens cannot be accommodated or companies that are distributing dividends. "

Díaz argues that this objection to the presentation of ERTE "it is a reflection that is within the EU"and that the Government has raised" in social dialogue "with employers and unions." We hope it will move forward, "he trusts.

The minister indicates that her department has received since the decree of state of alarm files that affect four million workers, and that the Government calculates that the processing of all of them will cost the public treasury this year about 18,000 million euros.

He reports that within the framework of the open social dialogue with employers and unions, an agreement is being reached "about the presentation of files during the escalation of confinement due to the pandemic, and highlights that "the commitment of employers and unions is absolute".

Within this framework, it is studied that unemployment rights go beyond the alert decree and, according to Díaz, in the case of ERTEs of force majeure, work is carried out so that "the public benefit for people is maintained" even if they do not meet the requirements. "To replace these months that they have consumed is a lot of public money, but it is an investment in social terms," ​​he argues. Regarding the dismissal for objective reasons, he states that work is underway for "a transitional stage."

Despite the fact that the measures taken imply increasing public spending even though income falls, Díaz believes that this is not the time to talk about raising taxes. "It is time," he points out, "to wage a fierce battle to get the EU to understand that it must turn towards the exit from this crisis, which is social and economic (…). It is not a question of raising them, but of that some have to pay more so that others have to pay less"

The minister recalls that, at this time, "the self-employed, workers and small companies are bearing the state tax burden"In fiscal pressure," he continues, "we are seven points below the European average."

It also affects that "Spain took ten years to come out of the financial crisis when others came out in 12 or 18 months, because the austerity recipes, those 'Dolores Fridays', as we called them, made it difficult to leave. "" Now, "he added," we have to work to develop protection measures, when people need them, without reproducing what has happened in other crises. " In this context in which Díaz places the role of the cornerstone of the European Union, which, at the moment, he stresses, "must demonstrate that no further disaffection should be generated."

The minister warns that "We have tough weeks left in terms of employment" due to "extreme weakness in the structure of temporary contracts". "And we will see that we are not capable of accompanying the precarious in this crisis of enormous virulence," he laments. "I do not want to deceive anyone. We will see that permanent contracts more or less remain, but we have the problem with young people," who are 34% of those affected, Díaz acknowledges.

That is why he values ​​the minimum vital income agreement, that although it will leave out "a part of the precariousness and the irregular economy", it represents a great advance, because "as a society" it has been decided that this income should exist. Also this week, Díaz reports, it will be known how many workers already receive unemployment benefits. The offices of the public employment services (SEPE) recognize about 200,000 files per day to facilitate this payment.

Technical analysis office: we answer your questions about all types of market values