PP, PNV, Junts and ERC condition the extension to the millions and the deficit of the CCAAA 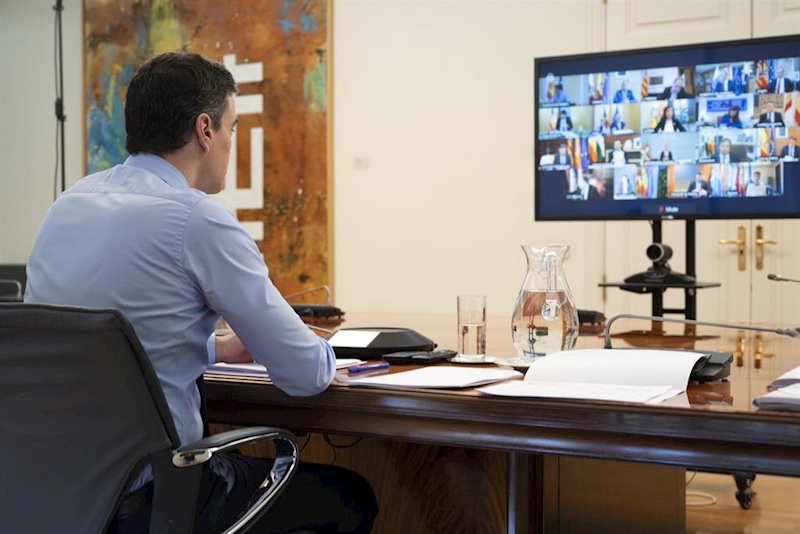 Discord between the autonomous presidents and the Prime Minister, Pedro Sánchez. The PP barons, the Catalan president, Quim Torra, and the Basque Lehendakari, Íñigo Urkullu have raised their voices this Sunday against the plan of the Executive of continue to extend alarm status and they demand an immediate return of the skills in the de-escalation. Neither 16 billion promised neither for the reconstruction after the pandemic nor the deficit to 0.2% have managed to attract their positions towards the approval of a new extension of another 15 days of the exceptional measures for the pandemic that will be voted on Wednesday in Congress. Without the votes of the PP, PNV, Cs and with the possible ‘noes’ of JxCat and ERC, it will not succeed.

The lack of understanding has been absolute at the eighth conference of regional presidents that has been held this Sunday. Not even all socialist presidents have accepted the measures without protest, for example Francina Armengol has called for more flexibility in the deficit, and the popular ones Alberto Núñez Feijóo or Juanma Moreno have criticized the "disproportionate use" of the state of alarm. Specifically, the President of the Xunta has suggested that "there is ordinary legislation" to carry out the de-escalation and that of the Andalusian Government has indicated that the state of alarm should be withdrawn this May.

His position, however, has not been as intransigent as that of Urkullu, who has formally requested President Pedro Sánchez to to reformulate "the management model for this crisis", and "that the application of the exceptionality legislation be reconsidered", to move on to implement ordinary legality in order to "guarantee public health and the gradual return to institutional normality". In previous statements, the PNV has shown signs of not being willing to continue voting in favor of perpetuating the current situation 'sine die', and even less after Sánchez recognized this Saturday that his Executive does not have a 'plan B' to replace the current de-escalated.

Knowledgeable sources indicate that Moncloa maintains the hope that the plan announced this Sunday to the autonomies will serve as an incentive to retain votes in the face of the procedure in the Lower House on Wednesday. Far from this, Torra considered the flexibility of the regional deficit to 0.2% "insufficient", and in front of the announcement of 16,000 million euros from the Executive for autonomies, he recalled that the Generalitat has put the cost of the Covid-19 crisis in Catalonia at 4,000 million. In addition, he has asked Sánchez to approve a universal income and suspend taxes, and prudence not to be "prisoners of calendars in discontentment."

Along the same lines as Urkullu, he has again claimed Sánchez that the Government has powers to manage the de-escalation of the coronavirus in Catalonia, either by not prolonging the state of alarm, by excluding Catalonia from that decision or by appointing the Government as the competent authority, as Torra already stated last week. His partners in Govern, ERC, have considered that the Government's response "stays halfway" and have called for more measures.

The Government will pay in three tranches the extraordinary fund of 16,000 million euros for the autonomous communities announced this Saturday by Pedro Sánchez so that the first 6,000 million will be paid in the "short term" and the rest in another two "in the second part of the year".

This has been advanced by the Minister of Finance and government spokesperson, María Jesús Montero, and the Minister of Health, Salvador Illa, at a press conference this Sunday. Montero has also detailed that the fund will be distributed among the autonomous communities based on "objective parameters based on the costs caused by the Covid-19" according to the information that the autonomous communities have sent.

Finally, the 5,000 million destined to alleviate the reduction of own resources of the autonomous communities by the fall of the economic activity will be distributed based on the data of fall of the collection.

THE ONLY POSSIBLE INSTRUMENT

Illa and Montero have also insisted this Sunday that alarm status is the only possible legal instrument to control the so-called de-escalation and therefore they have asked "responsibility" and "common sense" to the opposition parties to vote for the extension in Congress.

Illa has defended that in the "complex" stage of de-escalation that begins this Monday "it is essential" to continue with the alarm state as the only way to continue controlling the pandemic "in an effective way". In addition, he explained that it is the only way that the Constitution contemplates to restrict mobility, allowing there to be "common rules" for the entire territory and, if there is a regrowth, to have it available.

The US insists that the virus started in a Chinese laboratory

If you still don't know what a bearish channel is, take a look at the Liberbank chart