The masks "will be mandatory" on public transport from May 4 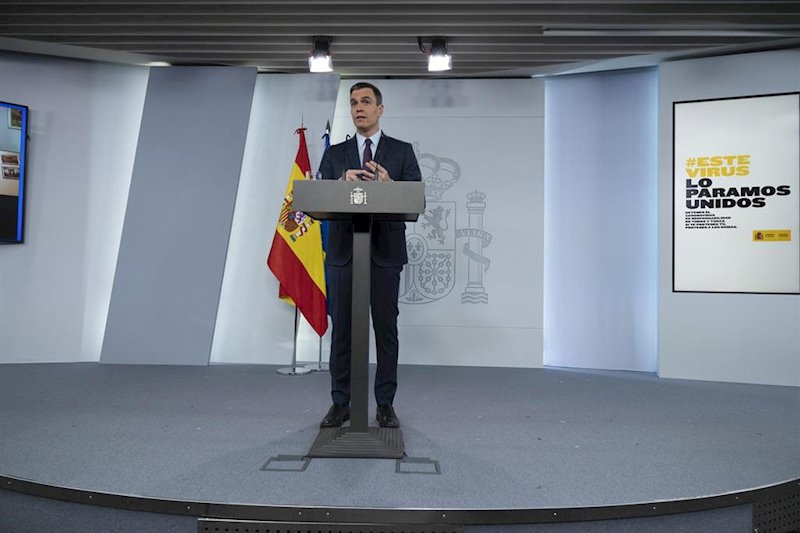 The Prime Minister, Perdro Sánchez, has announced the mandatory use of the mask on public transport since Monday, May 4, the date on which the phase 0 of confinement de-escalation of more than six weeks that has been alleviated since last weekend, with the departure of the children.

This was stated during the press conference offered at the Palacio de La Moncloa, in which he explained that for the fulfillment of this obligation, the Government will provide a total of 6 million masks at the main public transport hubs, another 7 million to the Spanish Federation of Municipalities and Provinces (FEMP) to proceed with its distribution and another 1.5 million to an organization to guarantee its distribution in groups with disabilities.

He began his speech with a message of hope: “Week by week the contagion decline curve is consolidated”. "The effectiveness of confinement has been demonstrated" and the state of alarm, said the Prime Minister, to add that "we are reaping the fruits of the effort we have made", so now, "social discipline has earned a deserved relief ”, fit, first of the children's outings and, second, the first step of the de-escalation this Saturday.

Of course, he said that in this phase "control and social responsibility" of all citizens will be even more important. He recalled the four phases of the de-escalation that begins on Monday, May 4, with phase 0, which includes some new features.

The new measures adopted by the Executive, in addition to the mandatory use of the masks are the following:

Restaurants and cafes may open so that citizens can collect orders at the premises. These will be carried out by phone call and the Internet and a preferential distribution system will be established for the elderly or with dependencies.

The shops and service premises which can open from Monday, among which you have quoted bookstores, hardware stores, hairdressers, clothing or shoe repair workshops may attend by appointment and at a single client for each worker. Preferential service hours will be established for those over 65 years of age, which will coincide with their walk times, from 10 to 12 noon and from 19 to 20 hours.

They will also open the files to the public., to which citizens can go regardless of whether the documentation may also be required online.

Starting Monday, the training for professional athletes that they will be individual and without time limit within the province. Paralympic athletes may be accompanied.

The mobility of citizens will especially increase in four islands -Formentera, Hierro, La Graciosa and La Gomera- that the next Monday they begin the de-escalation directly in phase 1. In these places, social contact in small groups will be allowed, as established by the provisions related to said phase, in addition to the trips of the cohabitants in the same private vehicle (with the possibility of occupying all the places in the vehicle), as well as the opening of terraces and cultural facilities with the anticipated capacity restrictions.