The Government lowers its forecasts and calculates a 9.2% drop in GDP and a 19% unemployment

The Government has sent the Stability Program 2020-2023 to the European Commission with a major revision of the forecasts, given the impact of the pandemic and the measures to alleviate the health crisis that has left an important mark on the economy. Thus, the Executive foresees that the Gross Domestic Product (GDP) 9.2% crash in 2020 and a rate of unemployment that will rise to 19%, while for 2021 it estimates a rise of 6.8% in 2021 and a decrease in the unemployment rate to 17.2%.

This was announced by the third vice president and minister of Economic Affairs, Nadia Calviño, at a press conference in Moncloa to present the new macro table and the Stability Plan 2020, where she highlighted that recovery will be asymmetric 'V' shape, with a very steep decline and a more gradual recovery. In the second quarter the most intense fall will be registered and the recovery will come in the second half of the year and in 2021.

The macroeconomic scenario presented this Friday is "exceptional given the circumstances," said the minister and is endorsed by the Independent Fiscal Authority (Airef). They have also taken into account the "sharp contraction "of world GDP and that of the euro area, according to the estimates of the International Monetary Fund (IMF). "The Spanish economy was growing above the average for the euro area (…), but the unexpected shock of the pandemic has brought an abrupt end to this positive growth and the scenario has completely changed," Calviño reiterated. 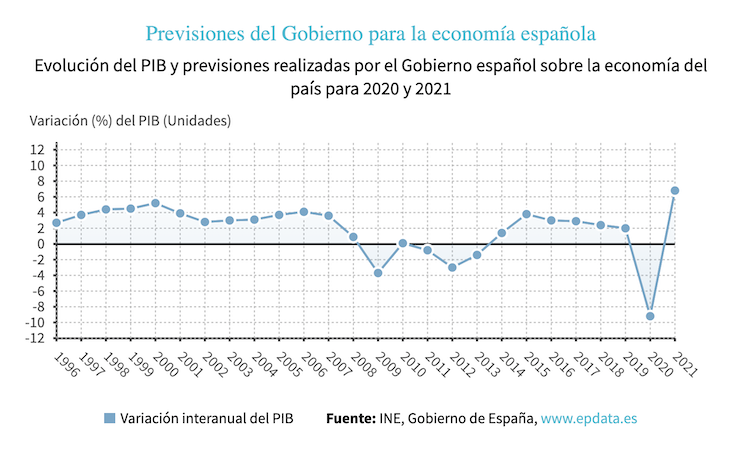 Calviño has indicated that these are "prudent" estimates, in a "very complex" context, where the Government expects a "very intense" drop in GDP in the short term and with a "very negative and very steep" slope, with the greater impact in the second quarter and a subsequent recovery. The progressive lifting of containment measures will reactivate domestic demand, although a strong impact of Covid-19 on tourism is still anticipated. Thus, GDP will grow 6.8% in 2021. 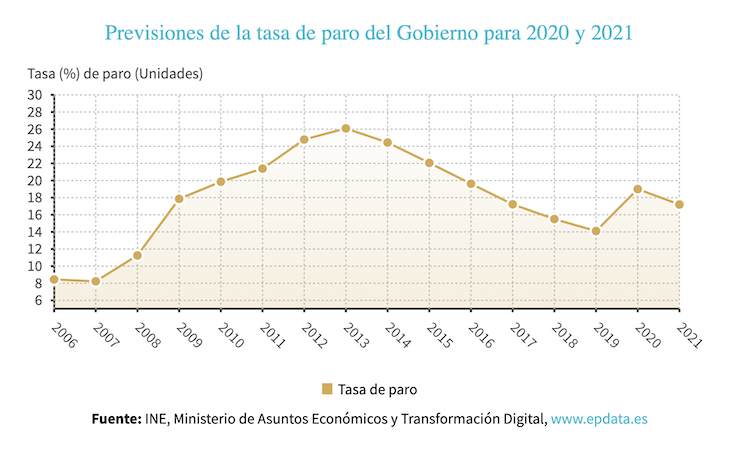 The new macroeconomic table that Spain has sent to Brussels contemplates a decrease in private consumption of 8.8% this year, but an increase of 4.7% next year, while public consumption will increase 2.5% in 2020 and 1.8% in 2021.

Spain grew 2% in 2019 and closed the year with a deficit of less than 3% for the first time since the crisis (2.7%). The Government already revised downward growth in February to 1.6% and in March the increase in some deficit items was already registered in March. Further, First quarter GDP registered a historical 5.2% drop in the first quarter due to Covid-19.

GOVERNMENT MEASURES HAVE SOFTENED THE FALL

The new macroeconomic table that Spain has sent to Brussels contemplates a decrease in private consumption of 8.8% this year, but an increase of 4.7% next year, while public consumption will increase 2.5% in 2020 and 1.8% in 2021.

Likewise, Calviño reiterated that the measures adopted by the Government, both social and economic, to face the impact of Covid-19 are allowing to "soften" said impact, as already observed in the "stabilization" of some indicators in April, such as the consumption of electrical energy, spending with a credit card or the "partial" recovery of the Social Security affiliation that was lost in the month of March .

In fact, Calviño highlighted that the fall in employment in the first quarter has been less than the decline experienced in the previous crisis, thanks, among other things, to the flexibility and extension of ERTEs and to the coverage of a significant part of income.

"These measures are going to allow that once we get out of the hibernation of the economy and business can be reopened, we will have as soon as possible the basis for a robust recovery and intense growth in 2021," stressed the minister.

Asked about the greater economic impact of Covid in Spain than in other neighboring countries, Calviño stated that the pandemic has affected our country "more intensely" and, therefore, the containment measures have also been more intense, "and logically, the economic impact "in Spain is higher, although" aligned "with that of other EU countries.

In addition, he pointed out that in the Spanish economy the sectors that have been most affected by confinement measures, such as tourism, hotels, restaurants or air transport, have a very important weight in Spanish GDP and were precisely those growth engines before the pandemic.

However, Calviño reiterated that these are "prudent" estimates and that the Government has opted for the "more pessimistic" forecasts, for which they have "a certain margin" in the event that the de-escalation process is delayed, Although he hoped that it starts in May and ends in June, as a base scenario.

As for the greater financing needs of Spain to face an increase in spending of more than 54,000 million euros and a decrease in revenues of more than 25,000 millionCalviño pointed out that the Treasury is addressing these greater needs through additional issues to those foreseen on the calendar, such as the last syndicated, with "relatively low" financing costs.

"We are financed under very beneficial conditions and we will continue with this issuance policy to meet the needs in the coming months," said the minister, who added that, however, they do not give up other formulas that could be "more interesting" by terms or by interest rates.

In this sense, he recalled the financing instruments that the European Commission is preparing, such as the ESM or European unemployment insurance (SURE)The government wants it to be ready on June 1. Thus, he said that the Executive is working to make these instruments available "as soon as possible", although by themselves they are not enough.

For Calviño, it is also necessary to approve a European economic recovery fund (The Government proposes that it be endowed with 1.5 trillion euros), as well as a joint debt issue, the so-called Eurobonds or Coronabonds, since it is not a national but a community crisis.

On the other hand and asked if you agree with the union opinion on the possibility of nationalize companiesCalviño has stated that "he does not see it productive" to engage in an ideological debate of this nature because the Government is already giving an "effective" response to the problems of the companies. "From the first moment we have opted for ambitious liquidity measures," he stressed.

Finally, the head of Economic Affairs he reached out to the opposition parties to join the reconstruction pacts to tackle "together" the process of economic recovery, given the "unprecedented and unparalleled" challenge facing Spain.

"Addressing a new production model, a new, more progressive and fairer fiscal framework and tackling demographic and climate change require the maximum agreement in the parliamentary sphere, which would reflect the great agreement that Spanish society wants," he stressed.