The bitcoin network has been criticized in the past for its inefficiency as a payment system, but when it comes to low fee transfers, the iconic cryptocurrency takes the cake compared to legacy payment systems.

Cryptocurrency analyst The Moon drew attention to a recent giant transfer on the bitcoin network. It was observed that at least 106,000 BTC worth around $ 700 million were transferred for just $ 0.26. 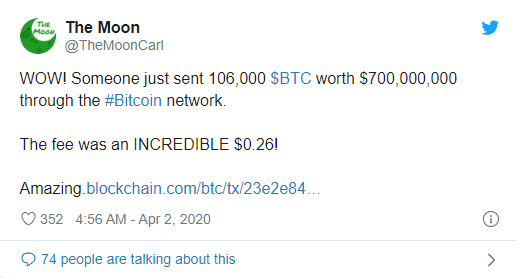 Based on data transmitted by Blockchain.com, the owner paid 0.00003935 BTC to be exact, which translated to 26 cents in USD at the time. It should be said that the owner would have been charged a much higher fee to transfer the funds if they had used, for example, Western Union or a bank.

Also, BTC transfers are seamless and less time consuming as no personal identification details are required and the owner is also not expected to wait days before a financial supervisor authorizes the transaction.

The number of dynamic XRP addresses has dropped 83.3%

"We have no plans to leave Venezuela"

how to buy cryptocurrencies with PayPal