Ripple recently published the report for the fourth quarter of 2019 on the market for its XRP token.

The report reveals that, since the creation of the XRP ledger until December 31, 2019, more than 51 million transactions In total, with more than 150 validators participating in the network and no transactions have been discriminated against or censored.

In the third quarter of 2019, Ripple also reduced XRP sales and continued this approach in the fourth quarter, but the report argues that it is still difficult to obtain reliable data on actual commercial volumes from public sources.

In the fourth quarter, total XRP sales were $ 13.08 million, below $ 66.24 million in the previous quarter. In addition, Ripple suspended scheduled sales, focusing exclusively on over-the-counter sales with strategic partners.

The average daily trade volume also decreased from $ 198.10 million to $ 187.34 million compared to the previous quarter, while XRP volatility decreased from 3.6% in the third quarter to 3.1% in the fourth quarter. 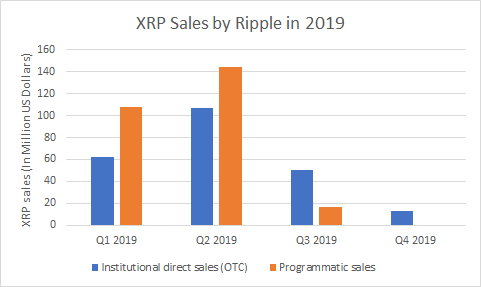 The report also reveals that as of December 31, 2019, Ripple still had 49.9 billion XRP blocked in a series of escrow deposits and that these XRPs are delivered to the company at a rate of one billion per month. Therefore, in the fourth quarter of 2019, 3,000 million XRP were also launched.

However, during the quarter, XRP 2,700 million were returned and subsequently new deposit agreements were stipulated.

During the year, XRP derivatives were available in several markets, such as Binance, Huobi, OKEx, AAX and FTX, which helps improve the efficiency, liquidity and strength of the XRP market.

The loan market has also gained momentum over the past year, and XRP has been available on many of the largest cryptocurrency loan platforms, including Genesis, Celsius, Nexo and SALT.

The report includes information not only about XRP but also about other Ripple services.

For example, during 2019, the dollar volume traded through ODL (On-Demand Liquidity) increased more than one hundred times from Q1 to Q4, and in particular from Q3 to Q4 increased by 650%. The number of ODL transactions also increased by 390%.

Ripple made an investment in Bitso, the largest exchange in Mexico, to support the US-MXN channel of RippleNet.

Xpring.io, the new website that serves as a central developer center, was launched and an investment was made in BRD, one of the oldest cryptocurrency wallets in the industry that will depend on Xpring to support and integrate XRP.

An application for FFF | TIME ONLINE